This post may contain affiliate links. Please see our disclosure for more information.

Barley is an ideal grain for Kapha dosha, and barley cereal makes the perfect breakfast for the spring season, which is Kapha season.

Barley is an ancient grain that is low in gluten, and satisfying, despite being in the easy-to-digest category of foods in Ayurveda.

Barley grows well in North America, and the Northern Hemisphere in general, making it a good choice for people living in these regions.

Most of the barley (95 percent) grown in the United States is used for animal feed and malt for beer.

The reason for this is not because barley isn’t a nutritious and healthy grain. It is only that we lack the culture of consuming it.

Barley is a cooling diuretic, which helps to remove excess water weight and gently detox the body.

Barley has a lot of fiber (both soluble and insoluble) which you can see by the thick liquid, and demulcent quality of the cooked barley.

Insoluble fiber in particular is soothing to the gastrointestinal tract, while fiber in general stimulates a release of bile from the liver and gallbladder, which aids with fat metabolism.

The presence of alkylpyrazine thins the blood, which helps to cleanse it of toxins. Kapha blood tends to congest and get thick, so this is another benefit for Kapha.

Surprisingly, barley cereal isn’t heavy, despite being sweet in taste, and comprised of the earth element.

The reason is due to all the effects listed above, especially high fiber, low gluten, and diuretic qualities.

The sweet taste and gooey qualities make it balancing for Pitta as well, while Vata may have trouble digesting barley due to the fiber and dry quality.

Pears are a kapha friendly fruit. They are sweet and astringent, and another great source of fiber.

Pears taste wonderful with the barley and the cinnamon, the latter bringing in a warming element to balance the cooling qualities of everything else.

Pears are dry, cooling, and can be a little difficult to digest due to something called “stone cells,” which are a remnant of the pear’s ancient pedigree.

According to Joyful Belly, older varieties of pears could not be eaten raw because they were rock hard. They required hours of cooking to become edible, and it was common to stew pears with honey and spices.

Then, in the 18th century, pears were bred to have softer flesh, and they became more what we are familiar with today.

So if you have trouble digesting pears, especially raw, this very well could be the reason. Perhaps it is the intelligence of the pear speaking.

Raisins are sweet and nutrient dense, but did you know that they are also a powerful digestive aid?

Raisins are alkalizing, and bring relief for bloating, gas, acid reflux, and constipation. Raisins are especially supportive for Vata due to their sweet taste, tonic effect, heavy quality, and laxative effect.

Ayurveda recommends soaking or cooking raisins to maximize their digestive effect. A daily portion would be around 8-10 raisins.

How to Purchase Barley

When you visit the grocery store to purchase barley, it can be confusing, since there are so many different versions.

To be edible, barley must have its inedible outer shell removed. This is hulled barley, and it is considered a whole grain.

However, it is much more common to encounter pearled barley, which is partially processed, with some nutrient loss.

If you purchase barley flour, barley flakes, or barley grits, it could be made from hulled OR pearled barley. Check the label to be sure.

Pressed barley is my favorite choice, and it is what I used in this barley cereal recipe. You can find good prices (and good quality) barley at Asian grocery stores that sell Korean products.

Barley is popular in Korea, since it is used to make a popular beverage of roasted barley tea, known as bori cha in Korean. A similar drink is China is called mugicha.

Here’s a recipe for bori cha that would allow you to make a tea, then save the barley for use in a recipe. Very smart! (Note that pressed barley can also be used for the tea.)

A Quick Guide to Barley Types 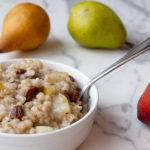 PRO TRICK: If the barley sticks, and it isn’t burned, turn off the heat, cover the pot, and let it rest for 5-10 minutes. The stuck barley will release from the bottom of the saucepan.
Share
Share
Pin
Telegram